Shining Through and Overcoming Adversity
– Stories of Four Who Absolutely Are

Some folks seem to shine when dealing with and overcoming major adversity, while others of us wilt at just the thought. In my own case, a mere broken fingernail greatly bothers me and rivets my attention until it can be filed down or trimmed smooth again. That some people appear able to deal with life-threatening health issues and repeated setbacks without breaking stride is somewhat mind boggling to me. How about you? Here are four who haven’t let adversity stop them. 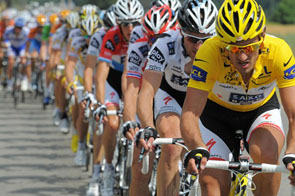 Florida’s Sandy Scott took up competitive cycling at age 64. About a year later, in his third race, he had a horrific accident in which his neck was broken — a C1-vertebra fracture, a break that is most often fatal. His doctor advised him to have his vertebrae fused together and to give up vigorous activity, such as racing on a bike. Sandy, a former skydiver and airline pilot, had other ideas. After nine frustrating months of setbacks and unsuccessful attempts to heal, including wearing a neck brace, Sandy was finally healthy enough to get back on his bike.

In the three and a half years since his possibly fatal or paralyzing injury, Sandy has captured 12 Florida-state cycling titles in the 65-69 and 70-74 age groups, including state records in the 20K time trial in both age groups. Because he didn’t let adversity stop him, Sandy Scott is enjoying setting new personal bests and going faster than ever at age 70. 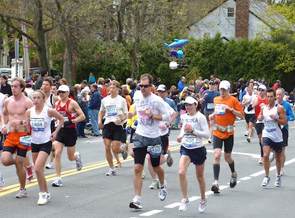 A three-pack-a-day cigarette smoker who’d smoked for 25 years, Texan John Fredrickson had clearly done some serious damage to his lungs. When he was told the damage included the development of deadly emphysema, that was a wake-up call. The ex-smoker decided to try running to improve his health and lung function and to lose some of his excess weight. At first he struggled to run even half a mile without having to stop and rest. After three weeks, however, he was able to run a whole mile and was noticing his lungs starting to clear and his poundage decreasing, so he stuck with it.

At age 53, John ran his first marathon and another just two weeks later. He was hooked. This spring, now a fit and healthy 71-year-old, he ran his 104th marathon. He now enjoys the challenge of seven to eight marathons each year. Think where John Fredrickson would be today, the quality of his life (if he were even still alive) if he’d let his tar-filled lungs and emphysema diagnosis stop him in his tracks. 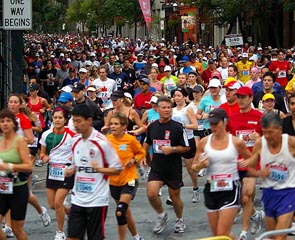 This past January, Houston’s Judy Loy ran the Houston Marathon in 5 hours 30 minutes, a 12:36 per mile pace. Not bad for a 71-year-old who has had five knee operations, three since the rollerblade enthusiast took up running 10 years ago. Her doctors say that the long runs she does in training for the 26.2 milers (she’s run seven) is therapeutic; after the first six or seven miles of a run, the natural lubrication of the knees kicks in and they stop hurting and start to feel pretty good. As long as she doesn’t run too frequently, the doctors approve of her running and think it helps her operated on arthritic knees.

They know that lack of movement is what does the most damage to one’s knees. Because Judy Loy hasn’t let one operation after another stop her, she enjoys training for and running marathons — and training novices to be able to run them, too — by serving as as coach and mentor in the Katy Fit marathon training club.

Pancreatic cancer is one of the deadliest forms of cancer. That’s one reason why 47-year-old Gary Resnick’s story is so inspiring. In January of 2009, Gary underwent six hours of surgery to deal with his stage-3 pancreatic cancer, during which his spleen, part of his pancreas and 19 lymph nodes were removed. This was followed up with six months of chemotherapy. Gary, however, wasn’t going to let a little malignancy stop him. He would, for example, keep his goal within reach by running the four miles to and from his cancer treatments; he was determined to run in the ING New York City Marathon in Novmeber of 2009 AND finish in under four-and-a-half hours.

In preparation for the NYC race, on March 29, a little over two months removed from his life-saving surgery, Gary ran a half marathon in an impressive (even for a completely healthy 47-year-old)two hours and six minutes. In May he bettered this time, running a 1:54 in another half-marathon tune-up. Now completely cancer free, on November 1, 2009, this father of three achieved his goal by running the NYC Marathon in 4:01:37.

Sandy Scott, John Fedrickson, Judy Loy and Gary Resnick give us hope. They show us that we can look straight into the face of adversity and know that we don’t have to let our troubles get the better of us. Like these four inspirational heroes, not only can we overcome all manner of adversity, but we can choose to shine through it.